Setlist from London show, on a paper plate! Ian's handwriting I believe. So, new song titles include Dot Com, Mexico, Summer Simmer, and The Yabba. 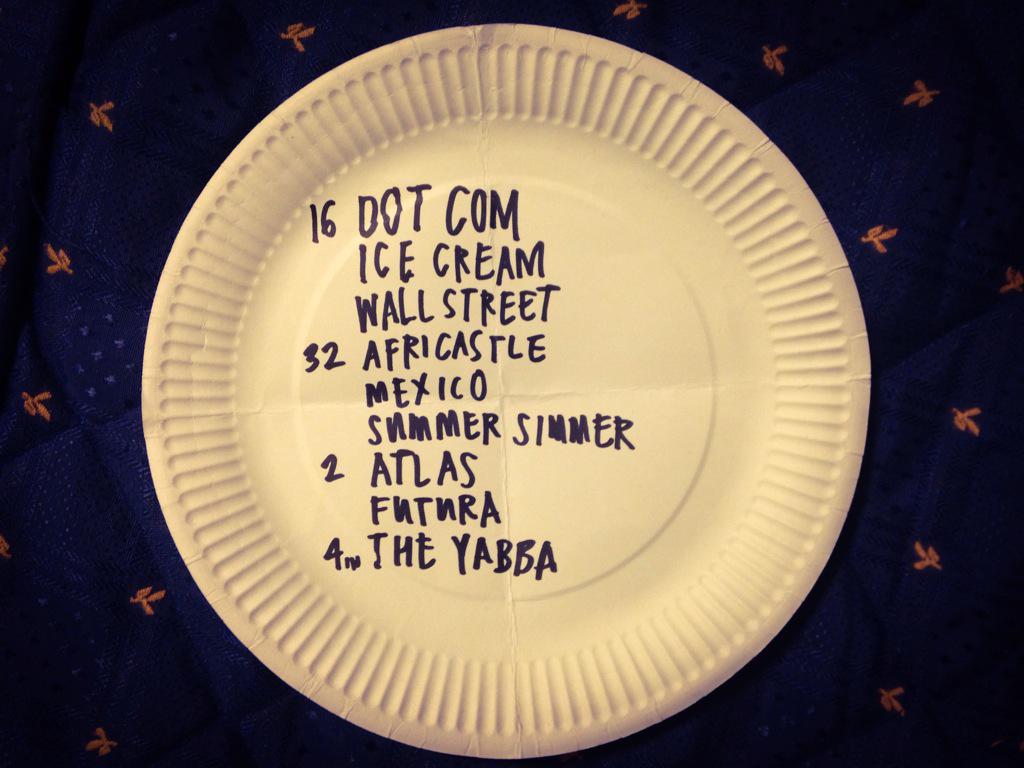 Pre-ordered the record and driving to Austin to see them. O happy day! 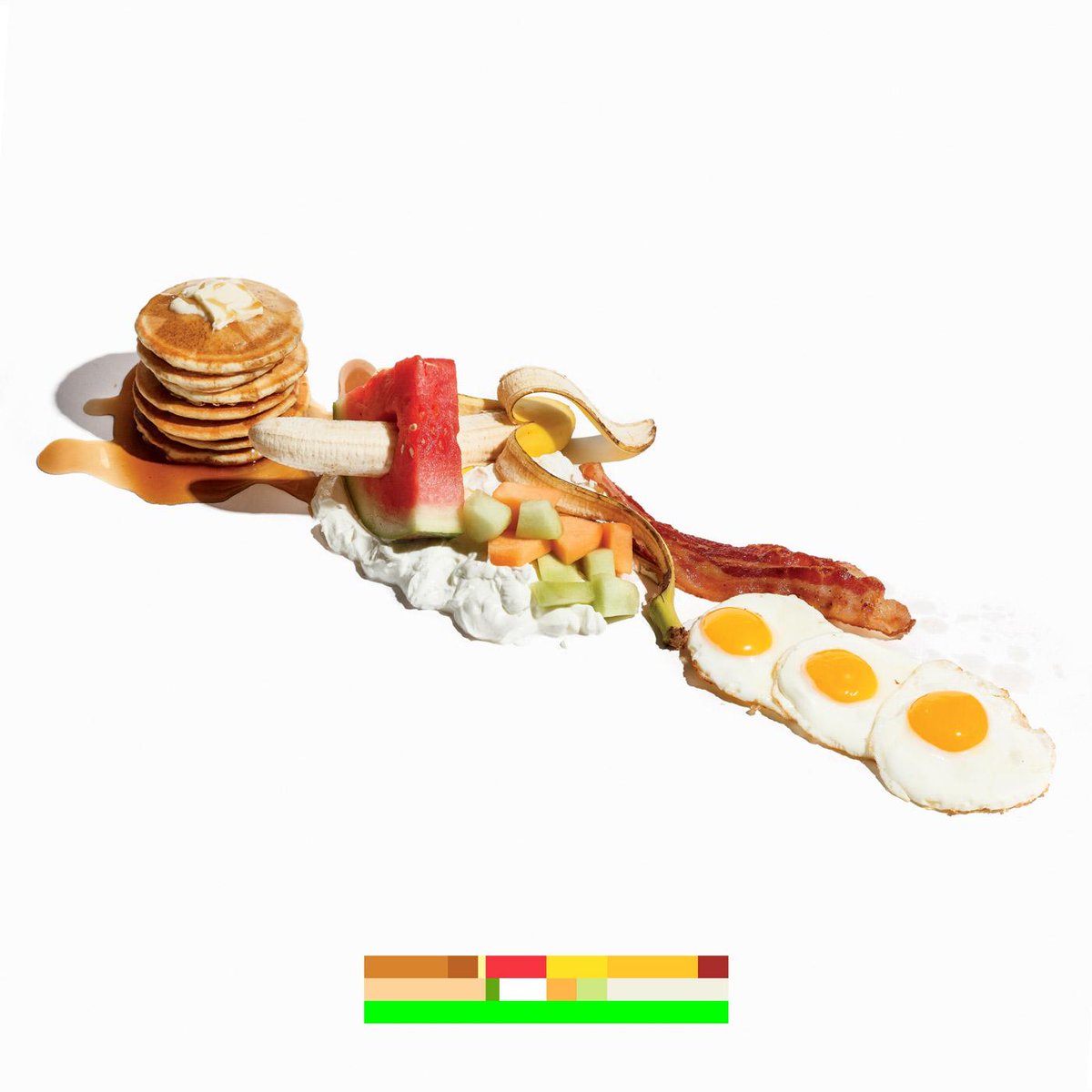 The press release describe it as “a mushrooming monolith of repetition” and “an organic techno thrum of nearly infinite loops that refuse to remain consistent.”

Pre-ordered record and CD. Bought tickets for Dallas and Austin, and backup for Philly, DC, and NYC. Not sure if I'll be moving to the East Coast this fall or not. Sucks that tix are will call only. I'll be losing money either way, but I didn't want to risk a sellout.

Just the ticket preorders are will call right? I was just going to get mine Friday morning from Mohawk's website.

I don't know...Maybe all ticket orders will be will-call. They're probably trying to fight scalpers. Some of the Brooklyn tickets (originally $20) are going as high as $180 now.

Alright I went ahead and ordered mine ha

UPDATE: Did a major site update with hundred or so new photos I've been collecting, and dozens of article links, etc... plenty to keep yourself immersed in Battles until the release of LA DI DA DI

In conjunction with Ableton, Battles have put together their mini-documentary ‘The Art Of Repetition’, a short film that joins Battles in their New York rehearsal space, studio in Rhode Island and on stage in Germany.

In ‘The Art of Repetition’, we visit the trio at their New York rehearsal space, join them at recording studio Machine With Magnets in Rhode Island as they record their new album, and accompany them onto the stage in Germany for an intense live performance. Along the way, we get an intimate look inside the band’s set-up, their unique methods of composing and, most interestingly, we get to know the three very different personalities that drive the band forward.

Watch the film via YouTube, and read Ableton’s interview with the band’s guitarist, keyboard and Push player Ian Williams here.

Pre-Ordered and Live Tickets!
Looking forward to seeing how DOT NET will sound in studio =D

We’ve been listening to these songs in preparation for La Di Da Di and tour. Some old favorites, weirdos & jammers. Playing over on Spotify here:

(I joined Spotify just to see the list, here it is in case you want to see but not join) Any guess on the first single/video?

The production company CANADA is looking for extras for our upcoming music video, which will be shot in Barcelona August 8-10. It will be a lot of fun and we need as many people as possible. If you can make it, please email battlescasting@gmail.com

The film will be broadcast on loop for 24 hours at bttls.com tomorrow (4 August).

Well I thought they might put the performance on Youtube after the 24 hour broadcast, but it looks like they only are making The Yabba available. In case you missed the broadcast, however, I did record it! The download link is below (1.35 GB).

Amy you're awesome!!!!! Thanks for the vid

If you live in Liverpool you'll be able to listen to La Di Da Di early! (14 September).

I have a feeling that'll be the first single/video.

baintzB EP
Given what we've heard so far I'd say 'La Di Da Di' is going to be the perfect blend of the EP's, Mirrored & Gloss Drop all packaged into yet another reinvention of the 'rock band'. I can hear tones and songwriting styles from each era just in 'The Yabba' alone. And from reading that Rolling Stone interview, I'm so glad it's a full-length record intended to be listened to all at once

apparently the album has leaked (bad quality) & I couldn't help but give it a few listens. After listening to it 3 times, my initial thoughts are it's another solid release.

Anyway, I'm going to wait until my pre-order arrives before I give it anymore listens, which will be difficult but this record deserves to be experienced in high quality.

I never listen to leaks.

1) It is bad quality. I want to experience the album for the first time in good quality.

2) It disrespects the artists.

I can't think of any artist, except Battles, that I even like enough to listen to a leaked release from.

1. I agree. Though for me, I listened to Gloss Drop 3 months prior to it's release and my opinion/listening only increased after hearing it in high quality. I doubt that will change with the new record.
2. I don't feel I've disrespected the artist. I support the artist. I've purchased every Battles release and have paid/will pay to see them live.

Like I said, I'm going to wait for the release to listen again...just wanted to share my initial thoughts on it.

I came! That looks so freakin good!!!!

What do you guys think? I was so excited to see it in my feed! But I thought it was odd, not in a great way. I guess after the super creative videos from Gloss Drop I was expecting a higher production value, this seems like something a new band might put out. Was anyone bothered by them pretending to play on the concrete without their instruments plugged in anywhere? LOL. And what was the point of the footage of them in the house? I wanted it to be weirder I guess. Thoughts?

I don't have a passionate stance on music videos for or against but I enjoyed it as much as other Battles' music videos. I like the overhead rotating shots though they were dizzying.

Can't say I care if their amps aren't hooked up as they're basically there for visual purposes.

The dude turning in the green shirt LOL

It had a vibe similar to Ice Cream video but a bit more serious in tone.

I loved the fade to black then cut to the overhead shot.

All the spinning shots were cool, or should I say looping shots.

Amps/instruments not being plugged in has been going on in videos forever.

Footage of them in the house did feel a bit out of left field, but whatever

I love this band it was great.

Full album stream from NPR ahead of official release.

Will you listen now or wait til you get the record?

Ugh. I don't know why they would do this. It is trendy I guess to stream the album ahead of time, but will it hurt or help the sales?

I think I will listen tomorrow, if it is good quality. I never listened to the leak, but if this is endorsed by the band (it must be) then I guess it is OK. Though I prefer to have the packaging in hand!

I love this video!

The performace shots are the highlights for me. They seem to really sum up the individual personalities of the guys. Dave is stylish, compact, workman-like, Ian is wonderfully expressive and a little flamboyant, and John is just sheer grim determination. i feel like I get a whole new perspective on the music from seeing this interpretation of its perfornance. Also, Ians little guitar flick move is super cool.

i have very good feelings about this record.

By the way, is that NPR link official or leaked?

Performance shots were the highlight of the video, especially with the psychedelic background video. Yes Ian was very flamboyant as usual.

I just listened to it, I said "fuck getting enough sleep"! lol.

I like it. I don't know if I miss vocals or not. This is definitely a new era. I like all the songs. Megatouch is reggae like they said! I can't wait to interview them!

Haha well It was official, and I used good headphones. During which I updated the band page with lots of new photos btw. I won't listen again until I have the CD in hand!

Very happy to hear all the crisp detail of the official release.
Great new album, especially when you get to know all of its subtle nuances.
I think it tops Gloss Drop for me!